I am shocked and saddened by the news that Dr. Sean Egan died today during his attempt to climb Mount Everest. I knew him personally and was following his daily progress with great interest. He was a tremendously energetic, fun-loving man who was always a great pleasure to be around. 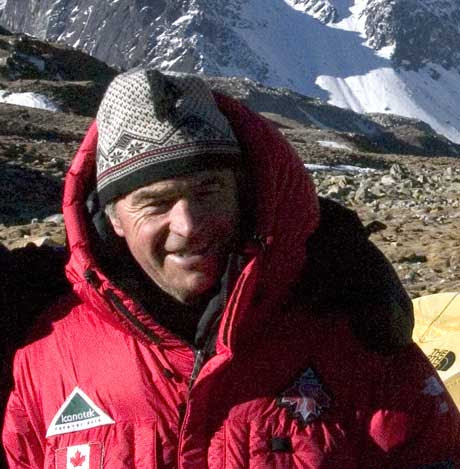 He will be sadly missed by all of us who knew him. I send my prayers and condolences to his family.

"This was nothing new for him. We're talking about someone who would swim in the Ottawa River in the middle of January ... a man who once walked from Toronto to Ottawa to raise money for CHEO ... a man who cycled from Oregon to Ottawa. [...]

Egan may have been a fitness fanatic, but that didn't mean he cut himself off from life's indulgences, including good food and a pint of ale or glass of wine.

Indeed. In his memory I can think of nothing better than to load a keg of Guinness into a backpack, hike to the top of the highest hill in the area and have a big party. A life of fitness and fun lived to the end. Rest in peace, Dr. Egan.

It is certainly odd to see a company position itself for untendered government contracts. It is also odd to see a company like Canada Communications Group get privatized and have the terms subject to a confidentiality agreement, which raises some questions about just why it would be in a privileged position to get untendered government contracts. See here:

Printing services requirements between $5,000 and $10,000 are handled by the Materiel Management Section. Requests above $10,000 are either processed through St Joseph's Printing Inc. or are advertised on the MERX™.

MERX being the system used to solicit competitive bids for government work.

Kate has connected a series of far more interesting tidbits.

This deserves a lot more attention. I encourage anyone who knows anything about this sweetheart deal or murky privatization process to shed some light on it.